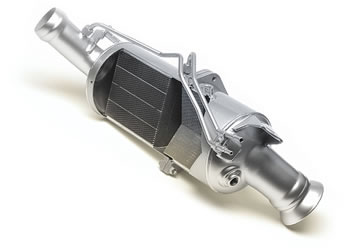 This is the second iteration of this article. It has been updated to reflect the common problems encountered when tackling what are understood to be DPF blockages.

In this article, we will address the following questions:

What is a DPF?

A DPF or Diesel Particulate Filter is a device integral to the operation of the exhaust emission control system. It captures particulate matter and hydrocarbons and stores them. Every so often, a regeneration process occurs where these deposits and particulates are burned off, converted to CO2, and vented out the exhaust.

Why do DPFs clog up? There are several contributing factors.

The first is the quality of the fuel. The second is the quality of the engine oil, and the third is the driving style and journey type. Diesel engines are not designed for short journeys or stop-start driving; such conditions create excess particulate matter in the emission control components. That means the DPF and other parts such as the EGR and catalytic convertor have more particulate waste to deal with.

The issue arises when the engine produces more particulate matter than the DPF can handle. Various symptoms may become evident such as engine hesitation or power loss. Eventually, an engine warning light informs you there’s an issue with the system, and if not resolved, the vehicle is put into a “limp home” mode, with reduced power.

If the system is clogged excessively, it is common for the ECU to prevent further regeneration. This is very lucrative for some dealerships and garages because, in their view, you have to replace the DPF, which can run four figures in cost. I can tell you categorically that the DPF can be cleaned unless it has failed catastrophically, even if it’s 100% saturated and the vehicle will barely run at idle. It can also be cleaned even if the ECU will no longer force a regeneration cycle with the help of diagnostic software. Furthermore, modern cleaning techniques and technology mean that the DPF does not have to be removed to be thoroughly cleaned but more on that later.

It is important to note that particulate matter that accumulates in the DPF is NOT just from the fuel and the combustion process. It’s usually a combination of those elements and engine oil. Oil can be blown through the crankcase breather system, but more commonly (on a diesel engine), it bypasses the piston rings and is poorly combusted. Those particulates then accumulate in the DPF. This is the reason you have mid-SAP and low-SAP oils. The theory is that such oils have lower ash content, which gives the DPF an easier life. In some cases, high ash content can damage the DPF because it cannot combust those types of particulates. Our experience differs from this as higher ash oils can prevent oil from being bypassed in the first place. However, that is a different subject for another day.

Secondly, and more important than the first, there MUST be an underlying reason for a DPF blockage if, in fact, it is actually blocked. The underlying causes should be established and, where possible, addressed accordingly.

Therefore, as best as you can, it is essential to establish if there is a DPF blockage and if there is, or there is a high probability that there is, to identify the root cause(s). If not, you will be fighting a losing battle.

This is why fuel-based DPF cleaners and professional DPF cleaning are so hit and miss. Many users fail to diagnose and/or address the root cause correctly.

If a fuel-based DPF cleaner did not “work” then there is a good chance that the actual fault is not directly DPF related or that an underlying problem is forcing you into a lose-lose position. It is not always as straightforward as many make out, but I will make it as easy as possible.

In many cases, using a professional fuel system and carbon cleaner to ensure that the fuel system and injectors are operating without deposits can be more important that using a dedicated DPF cleaner. Not only will a fuel system cleaner help clean the DPF anyway, but it will eliminate one of the most common contributory factors (dirty injectors) that, if not resolved, will allow the DPF to clog up again soon after. For this, we recommend the new Oilsyn Diesel Dr and DPF & Turbo or Archoil AR6400-D MAX.

You can use a generic cleaner that relies on the natural scavenging and cleaning mechanism (as described in the EGR cleaning article), or you can utilize one of the higher-end cleaners that use molecules that are activated during the combustion process (catalysts). These molecules bond with the hydrocarbons in the DPF and reduce the threshold temperature at which they can burn. By far, the best we have tested is the Oilsyn DPF & Turbo Dr.  It contains chemistry comprising of carbon-removing molecules that are activated during the combustion process rather than destroyed like most fuel additives. This type of cleaner combined with a spirited drive (or dropping down a gear) to create more heat will help to clean the DPF much more thoroughly. In genuine DPF blockage cases, these cleaners have some of the highest success rates of any DPF cleaning additives we have tested, reducing the saturation percentage, removing the engine warning light, and enabling passive regeneration.

It’s important to point out that heat is vital when removing carbon. So, using such a cleaner for short journeys will inhibit results. You have to combine them with a longer run and a driving style that permits the temperature within the DPF and the system in general to increase.

Suppose passive regeneration is not restored and the cleaner is not working. In that case, the DPF is oversaturated to the point that the ECU will not permit a regeneration cycle, the issue has been misdiagnosed, or another factor is restricting DPF regeneration. DPF regen could be locked out by the ECU rendering the system inoperable. It is also possible to have a vehicle so saturated that the back pressure is restricted so much that it will barely idle. For this, the DPF needs to be cleaned directly by a professional.

It usually consists of a 2 step cleaning process that must be administered by a professional. The first of this series is sprayed directly in the DPF through the pressure sensor hose. The chemical bonds with the carbon to dissolve it and prepares for the next stage.

The second step involves holding high revs to burn off the carbon for a few minutes, followed by a flushing solution administered through the same hose. This removes any residual cleaning agents and deposits.

We recommend finding a garage local to you for this type of clean.

Once the DPF is clean, it’s equally important to ensure that the particulates remain at a manageable level. I’ve already mentioned the importance of a professional fuel system cleaner to restore efficiency in the fuel injectors. I’d also recommend an ongoing fuel additive with a fuel catalyst or combustion modification technology, such as Oilsyn Diesel Power DNA or Archoil AR6900-D MAX. They will lower the number of hydrocarbons created in the first place. They reduce the threshold temperature at which the fuel is burned even when the engine is cold. So, even from the moment you start the engine, you’ll be producing fewer hydrocarbons. This is critical if your vehicle is just used for local trips (shopping runs, school runs, etc.). It gives the DPF a much easier life and will reduce its tendency to become oversaturated in the future. We have many reports from consumers and fleet owners that their vehicles regenerate much less when using Diesel Power DNA.  The key is to keep the carbon production at a manageable level for the emission control system, and such additives achieve this.

If the engine consumes oil, then unburnt oil can contaminate the DPF. During the next oil change, use a professional engine oil flush to restore lost compression, such as Oilsyn ReleaseTech Power Flush. As deposits build up on the piston rings, they push the rings away from the bore, thus allowing oil to bypass the rings and enter the combustion area. Once that happens, the DPF has to cope with an influx of particulates and more buildup.

Then use a high-quality oil and/or oil additive to retain correct compression and prevent any future deposit build-up. For this, we recommend any genuine synthetic oils (group IV or better) and/or Archoil AR9200 V2. This will keep the piston rings and bores clean and reduce the amount of oil entering the intake. Combine this with a fuel additive, and there’s no reason the DPF cannot outlive the vehicle itself without the need to use dedicated DPF cleaning procedures (invasive or otherwise).

I hope that helps. If you require any assistance, please don’t hesitate to contact me or a member of my team.