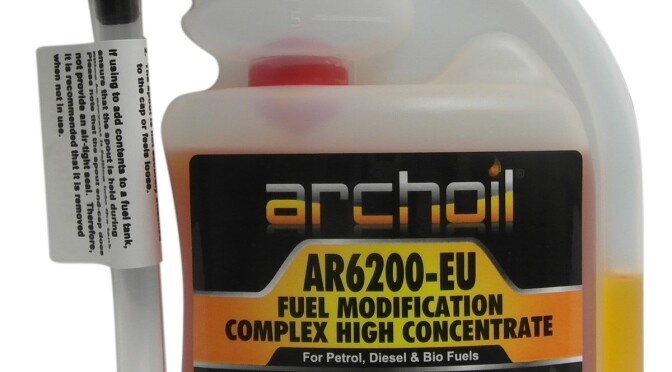 We regularly receive questions regarding fuel catalyst technologies and how they work. In particular, we receive many questions about Archoil AR6200 and AR6900-D MAX. The existing definition of “burn rate modifier” and the phrase “lowers burn rate by up to 400 degrees” has caused confusion.

In simple terms, a catalyst facilitates a better burn of the fuel. Each fuel type will have a flash point and auto-ignition point, which are determined by temperature and other factors. But these are different from the burn rate.

Both petrol and diesel are composed of carbons and these carbons, or carbon chains, require up to 1200ºF to burn thoroughly. This has nothing to do with the flash point. The flash point is the temperature at which the vapor of the fuel will ignite with the help of an ignition source. The auto-ignition point is the temperature at which the fuel vapor will ignite without an ignition source.

Once the fuel has ignited, it creates an exothermic reaction (heat). This rapid increase in heat burns the fuel (carbons) and establishes the explosion in the combustion chamber, thus resulting in a massive release of energy. This forces the piston downwards and causes the crankshaft to rotate.

If you can reduce the temperature at which the carbons burn, say by up to 400ºF in the case of AR6200, you can improve the burn. This is achieved by increasing the surface area of fuel droplets and starting the burn rate of hydrocarbons at a lower temperature to yield more available BTUs from the combustion process. The fuel becomes more aromatic (a sign of increased chemical stability), and a longer residual burn occurs. By commencing the burn rate lower, the lower-end hydrocarbons are burnt, and the combustion process is more residual and complete. This practically eliminates unburned hydrocarbons and wasted energy in the form of black smoke or emissions.

Altering the burn rate in this way does not directly increase horsepower. It increases the energy released through the explosion, which raises torque output. Burning the fuel more fully will also increase torque and lower emissions, as proven by the AR6200 carbon mass balance tests. This is the same process with all hydrocarbon fuels such as petrol, diesel, ethanol, heating oil, heavy fuel oil, etc.

Now, you might wonder, will AR6200 affect the octane rating of petrol?

We have proven with ASTM D2699 tests that there is no change. Octane is simply a measurement of when gasoline will automatically ignite. Increases in cylinder pressures and temperatures can make the fuel ignite prematurely, thus creating the dreaded engine knock/pinging sound. Octane boosters or anti-knock additives reduce the volatility of fuel so that it ignites as instructed via a source of ignition rather than on its own.

AR6200 only affects the temperature at which the carbons will burn once the fuel has ignited. It does not directly alter the flash or auto-ignition point. However, tests have shown that the improvement in combustion quality and stability means that the propensity of pre-ignition is reduced with AR6200. And this can have the effect of “raising” the octane. However, this cannot be demonstrated with a simple D2699 knock engine.

But isn’t this contradictory? Not really. When fuel is not entirely burned it can leave pockets of fuel that subsequently ignite a second time, again causing engine knock. The improvement in combustion quality from using AR6200 helps eliminate this because all fuel carbons are burned entirely the first time. AR6200 is not altering the auto-ignition point of the fuel but instead correcting another inherent source of engine knock – remaining unburned fuel.

We hope this helps and if you require any advice, please don’t hesitate to contact us; either I or a member of my team will be pleased to assist you.