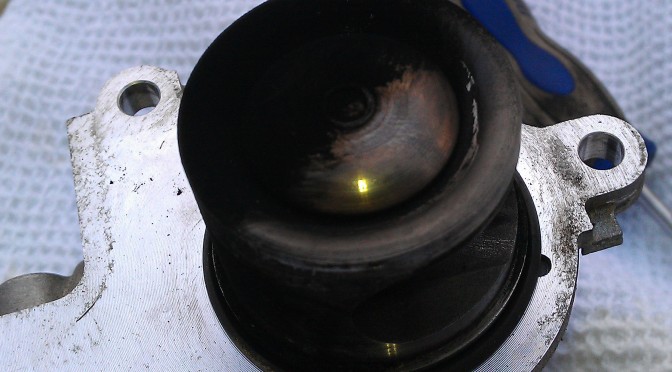 An EGR valve, or exhaust gas recirculation system is a primary component of an engine’s emissions system on petrol and diesel powered vehicles. Its purpose is to reduce NOx emissions by recycling a proportion of the combustion gases that normally exit through the exhaust. A valve is used to control the flow of gases, which are re-routed through the intake system, where they are re-combusted with fresh intake air and fuel. On a correctly functioning EGR system, this lowers undesirable exhaust emissions.

The problem with these systems, particularly diesel vehicles, is that excess hydrocarbons are produced during the combustion process. These hydrocarbons deposit themselves on the EGR valve and periphery pipework, where the EGR routes back into the intake system. Over time, this clogs and eventually blocks the EGR valve and the associated pipework.

It is important to note that the carbon buildup in an EGR system and other emission control components is not only from the combustion process. In most cases, it’s a combination of combustion-produced hydrocarbons and deposits from the crankcase oil. This is where many fail to correctly arrest deposit build-up on the EGR after it has been cleaned or replaced. More on this later…

The engine oil can bypass the piston rings, valve stem seals, and crankcase breather system (PCV). That oil is then consumed during the combustion process, but it isn’t fully combusted. The unburned oil and fuel are both recycled and deposited within the EGR. The oil will polymerize onto the metal surfaces due to the strong affinity between oil and metal. This newly formed surface acts as a “sponge” for all other particulates in the recirculating exhaust gases.

You have a combination of bypassed oil and unburned fuel deposited within the EGR system. This turns into a solid, which builds up and clogs the EGR valve and associated pipework, causing faulty operation.

If the EGR valve begins to stick or is blocked up, the solenoid used to operate it will draw more current to open it. The ECU detects that condition and throws an engine warning light.

The symptoms of a faulty EGR include:

As deposits begin accumulating, this restricts the flow of gases and disturbs the fuel mixture. The ECU expects a certain amount of recirculating gases as the EGR valve transitions from closed to open and visa-versa. These gases are not delivered as anticipated, hence the air/fuel ratio disturbance. This can result in hesitation, stumbling, and excess emissions, particularly during acceleration.
Natural Carbon Removal

Now, there is a natural carbon cleaning mechanism, and most additive manufacturers won’t tell you this. Suppose you’re able to improve the quality of combustion and are thus able to produce cleaner exhaust gases during the combustion process. In that case, these cleaner exhaust gases will naturally scavenge and remove carbon. This is also the case with many emission control components attached to the exhaust system, such as the hot side of the turbocharger, catalytic converter, or a diesel particulate filter.

You can naturally clean these areas. Many additives you see on the market today are essentially just fuel system cleaners and combustion catalysts. They might be promoted and marketed as EGR cleaners, DPF cleaners, and so on, but they’re nothing more than fuel system cleaners. What they do is restore the efficiency of the fuel system and, by doing so, improve the efficiency of the combustion, which reduces hydrocarbon production. In addition, some products contain a fuel catalyst technology that in itself will lower the hydrocarbons produced. You’re left with cleaner exhaust gases, which will help naturally remove the carbon from these mentioned areas. Except for a few products that contain technologies where molecules are activated during combustion (more on this later), such cleaners do not directly clean these areas, as the chemistry is destroyed during the combustion process.

The Problem with Natural Removal and EGR Valves

This natural cleaning mechanism is not always effective when cleaning the EGR system. The reason for this is that when cleaning carbon from your engine, heat is the primary factor. There must be sufficient heat. Heat, combined with the cleaner, recycled exhaust gases, helps remove carbon. The problem with the EGR is that the gases are usually cooled when they reach the valve and the periphery pipework. Therefore, the natural cleaning mechanism is not always as effective with EGRs, so you have to take alternative action.

Unfortunately, the most effective way to clean an EGR is to remove and clean it manually (if you have access to it). You’ll remove the EGR and the periphery pipework. Scrape off as much carbon as you can manually, then use a quality EGR aerosol cleaner to clean the remainder and reassemble the system.

If you don’t have easy access to the EGR valve, you can use an in situ aerosol-based EGR cleaner that you can either spray into the EGR pipework or through the air intake and clean the EGR this way.  However, particularly with diesel engines, you must be very careful. You don’t want to damage the engine. If you’re in doubt, you should let a trained professional carry out this procedure for you.

Once the EGR is clean and operational, it is essential to take the steps necessary to prevent further carbon buildup. While you can never stop it completely, you can maintain a manageable level of carbon that the engine can naturally consume without the deposits becoming excessive. If you were to remove the EGR, you’d be looking for a fine layer of carbon that you can scratch off with your nail. Anything more than that would be considered excessive.

1. Firstly, use a high-quality polyetheramine-based fuel system cleaner and carbon remover to ensure injector and combustion efficiency is restored. Otherwise, you’ll end up with a clogged EGR valve soon after. We recommend Oilsyn Diesel Dr/Petrol Dr or Archoil AR6400-P/AR6400-D MAX.

2. Secondly, you need high-quality engine oil and/or oil additive that helps prevent oil from bypassing the crankcase breather system or piston rings and polymerizing with the EGR system. You must tackle the problem from both the fuel system end and also the crankcase oil. I recommend a high-quality oil additive pack such as Archoil AR9200 or AR9400. These have been shown to prevent polymerization and even remove carbon from these areas in some cases.

3. Thirdly, and particularly if most of your driving is short or start/stop, use a high-quality ongoing fuel additive containing an effective combustion modifier or fuel catalyst. We recommend Oilsyn Diesel Race DNA, Petrol Power DNA, or Archoil AR6900-D MAX / AR6900-P MAX. These will improve the combustion quality and lower the amount of hydrocarbons being produced and thus recycled through the system, especially when the engine is in its warm-up cycle. Most of the time, you’ll only use a little bit of the product at a time, and a single bottle will last for multiple tanks of fuel.

Get Out and Drive

Finally, it’s important to make you aware our view is that most of today’s vehicles are commonly mis-sold. They are simply not designed for the short journeys that many people use them for – around town driving, shopping runs, school runs, etc. If the vehicle is not permitted to get up to temperature frequently, hydrocarbons will inevitably be produced and deposited throughout the system.

Because of the lack of heat, it will be challenging for the engine and the emissions control components to naturally manage carbon within the system. Therefore, using the correct oil, fuel, and fuel additives is essential to keeping the engine running efficiently.

If you require any advice or help, please don’t hesitate to contact us, and a member of my team or I will be pleased to help.