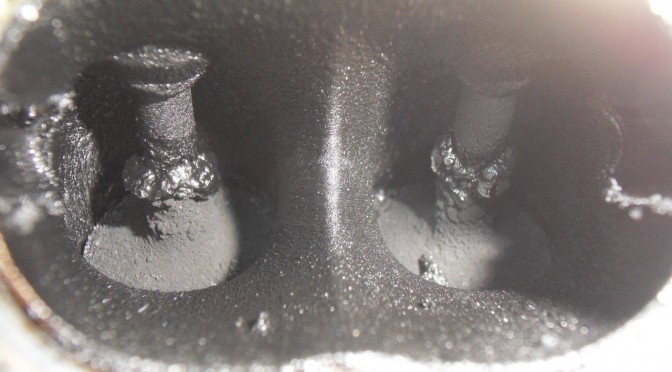 The problem with carbon buildup on the back face and stem area of intake valves in direct fuel injection petrol engines is not news. Fortunately, a significant breakthrough has occurred recently on the buildup issue, and the exact cause of the problem has been isolated.

Carbon buildup in direct fuel injection engines running on petrol became prominent in 2007 and 2008 when the engine warning codes and Malfunction Indicator Lights (MIL) began to light up in many vehicles with direct injection engines, including the BMW Mini, and those made by Audi and Volkswagen.

The presence of excessive carbon buildup has generally been attributed to the direct port injection design.  This design enables a more complete and efficient combustion process because fuel is injected directly into the combustion chamber rather than behind the inlet valve, which is where it is injected in conventional port injection designs.  However, with this design any cleaning capability of the fuel — or more importantly, the fuel additives — is non-existent in the inlet tract because the liquid fuel never comes into contact with the back of the intake valves.  The cleaning effect on the front of the valves on the combustion chamber side, on the combustion chamber surfaces, and the exhaust valves is easily achieved as a consequence of the clean-burning characteristics of high-quality fuel and/or additives. But the downstream surfaces of the inlet valves are left untouched, and therefore accumulate deposits. The volume of these deposits eventually alters the air-flow dynamics within the inlet tract, which in turn inhibits airflow and ultimately reduces volumetric efficiency considerably.

The impact of this is more noticeable on normally aspirated engines as they are less able to overcome air-flow restrictions, whereas forced induction engines can overcome minor restrictions as air is “forced” into the combustion chamber under pressure.

So what has changed?

A major breakthrough recently on the buildup issue has led to the exact cause of the problem being isolated. The port injection design is actually not the cause but merely the reason why the issue cannot be controlled and managed through normal fuel-derived cleaning processes.

It is now understood why even the most advanced post-combustion cleaning fuel additives or solvent-based cleaning through the fuel /air intake tract have had little effect. Furthermore, it also is understood why rerouting the byproduct from the crankcase breather into segregated catch cans or using water/methanol injection are of limited value when it comes to reducing carbonaceous buildup in the inlet port and inlet valve surfaces.

Post combustion cleaning additives, solvent-based intake cleaning, and water/methanol injection are not effective because the carbon species responsible for the buildup are predominantly from lube oil and produce active but very dense layers of carbons.  In some cases even grit blasting techniques have failed to remove the buildup because of the integrity, toughness, and adherence of the deposits.  In contrast to these deposits from lube oil, ones resulting from the decomposition of fuel tend to produce a satin black buildup that can be scraped off easily with a finger nail.  This type of deposit can be removed with fuel-borne additive technology. However, the deposits formed from the decomposition of lubricating oils during engine operation have been found far more difficult to remove.  This deposition and growth of carbonaceous debris has been demonstrated on a test engine with inspection ports positioned in the inlet tract.

In the pictures below you will notice the solidity of the lube-based buildup on the inlet valve of an Audi RS4 (4.2 V8 TFSI) versus the fuel-only carbon buildup on an EGR valve in a different vehicle.  The carbon on the latter is easily removed either manually or via fuel additive technology that is still active post combustion. 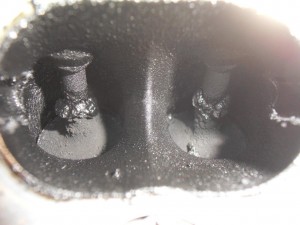 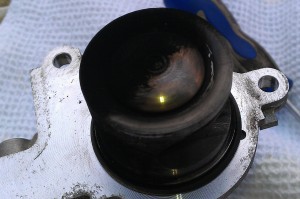 Oil on valve stems – It should be noted that the presence of lubricating oil in this location is normal. Having a controlled amount of oil there keeps the valve stems lubricated.  One reason why NA engines tend to suffer more from inlet-valve deposits is simply that in the created vacuum, the oil from the valve stems is more difficult to “control” because it is sucked through by the pressure differential existing between inlet manifold and the atmosphere.  In comparison, forced-induction engines (turbo or supercharged) generally operate with the intake manifold under positive pressure so less oil is pulled through the seals.

So if the small amount of oil bypassing the valve stem seals is normal, and indeed required, then why is there an excessive buildup of deposits on the valves?  One hypothesis is that:

The oil is being broken down by the catalytic (reacting) action of the materials used to manufacture or coat the valve stems.  In particular, nickel and chrome alloys. This pyrolytic decomposition is widely recognised in the industrial power generation sector where hydrocarbons are in contact with superalloys used in the construction of combustors, nozzle guide vanes, and exhaust components.

In layman’s terms, this means the materials used to manufacture and harden the valves are reacting with the lubricating oil and creating an aggressive bond between the lube and the valves!

Although this hypothesis seeks to explain the mechanism behind the formation of these carbonaceous deposits, there are still many challenges ahead.  As carbon is the constituent part of all lubricating oils and fuels and each of these is fundamentally required by engines in their present form, a method of reducing or eliminating carbon buildup must be sought.

Once oil has initially decomposed and formed a bonded carbon deposit with the valves, it remains chemically active. This allows further carbons — whether from engine oil or recirculating fuel emissions – to adhere to the existing mass with ease.

Some manufactures have incorporated a more complicated fuel system with a combined port/direct port engine design to retain the benefits of direct port injection whilst injecting some fuel behind the valves to help keep them clean.  However, for existing direct port engine designs there are few viable options. One can change the valve material and/or use a coating that doesn’t catalyse with carbons or enable the adherence of carbon, or introduce an additive pack that can inhibit carbon formation.

Valves have to work very hard and current valve materials are chosen for their toughness and durability.  Any replacement material and/or coating would have to at least share or improve upon these properties.  There are proposals in the area of material and surface coating choice but we are not at liberty to share them at this stage.

Other theories consider that at certain engine operating conditions there is a small amount of backwash as the early injection of fuel occurs whilst the inlet valve is still open. The contribution of EGR also needs to be considered.  For compression-ignition engines – diesels – the heavy contamination of inlet tracts with a dense, but greasy, carbon-based deposit is well known.  There are many EGR deletion methods that focus on the prevention of this deposit buildup, which as in the case of their petrol-fuelled counterparts, can seriously impede the flow of inlet air to the combustion chamber.

Operating temperatures of engines have tended to increase with commensurate increases in combustion chamber parts. And heat soaking on shutdown, as well as extensive idling periods, have been shown to affect the amount of buildup on upper cylinder parts and valve gear.

Regardless, the issue of removing existing deposits does not go away.  The use of more advanced polar solvents will be investigated but this process is still constrained by the hardness of the carbon buildup, as well as the risk of unmanageable chunks of carbon being dislodged and damaging valves or cylinder bores during engine operation.  Managing the gradual fluidising of deposits so that they can be safely consumed during combustion is a significant challenge.

There is some data to suggest that the use of certain oil additives or group IV and above base stock oils (pure PAO, esters, etc.) reduces the speed of buildup.  However, this is not fully substantiated as back-to-back tests were not conducted on the exact same vehicle.  The tests show visual buildup compared to other similar vehicles of similar mileage that are not using additives or group IV and above engine oils.  Furthermore, some of the PAO-derived oils are more readily broken down by catalytic action and tend to have better high-temperature resistance to degradation, thus keeping a fluid film on the valve stems where decomposition may occur.  One area of interest is the use of mineral oils containing carbon fluidising additives as found in many two-stroke engine oils; however these compositions generally do not meet the lubrication specifications required by modern engines.

Archoil® has been using proprietary esters and fluidising technology for some time and we have initiated further tests relating to this technology and direct port engines.  We will keep you posted as soon as we have more information.

Archoil has released a fuel conditioner (AR6900-P MAX) that specifically addresses this issue.  By delivering a regular dose of polyetheramine and proprietary combustion catalyst, much of the carbon matter from engine oil or that created through the combustion process is neutralised.

Due to the concerns raised in the article – 1.  Stubborn composition of the existing carbon build-up and 2.  Minimal effect of detergent and fuel borne catalyst technologies in areas of insufficient heat, AR6900-P MAX will be limited in its ability to remove existing build-up.  However, it will help neutralise and inhibit further deposit build-up.